When I began, there was a 4th and 5th grade chorus, totaling 120 students. After a year of working with that number, I proposed to Stefan Vogel that we have two choruses which would be more manageable. Somewhere along the early line, I added a 3rd grade chorus. They sang in the Holiday Program and a Spring Concert. I learned in my first year that everyone participated in the Holiday Program, meaning that teachers from grades K-2 planned songs, poems or skits to be included in addition to chorus. This, in time led to 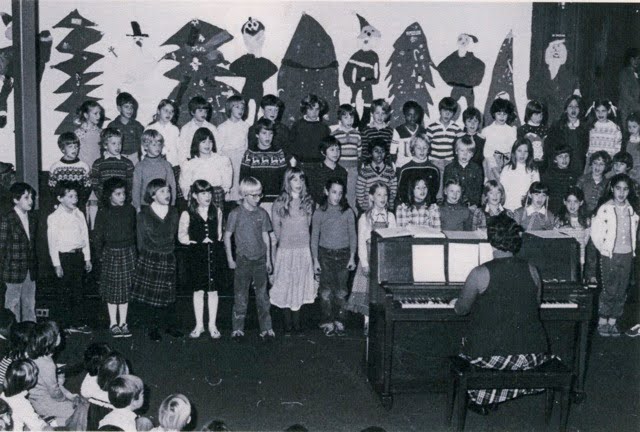 As the number of classes increased (smaller class size), including Kindergarten in the music schedule became a difficulty. I thought that perhaps having a weekly sing-along would be the answer. Stefen Vogel, principal, played guitar and sang and was happy to be part of this. We included 1st grade and placed it on Friday afternoons. Recognizing that 2nd grade was the only grade not to have a second weekly music experience, it became K-2. Luckily, Dan Bell, a second grade teacher, also played guitar and sang and joined Stefan and me. We finished the week in the Multi singing along! 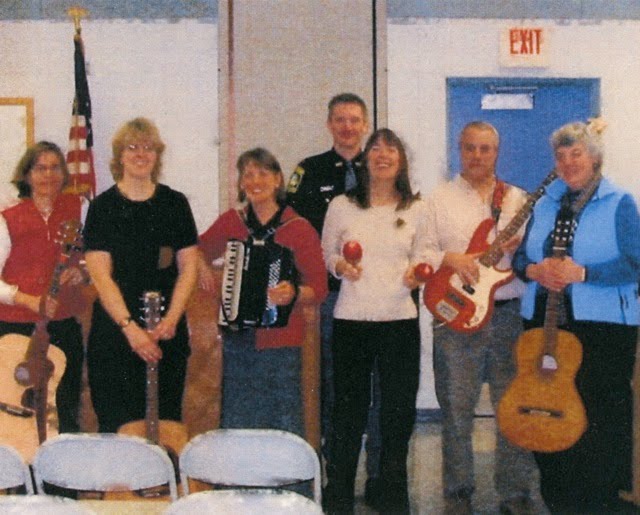 Ever expanding at Ray School, Dan went on to teach 5th grade and Donna and Ellen were granted (thank you, Bruce Williams) a day each week to create an integrated arts program, adding a new part time position in both art and music. Laurie MacGregor joined Donna in the Music Department and took over Singalong. With her abilities as a composer, she arranged songs for a “Band” to play each week. Never the same each week the Band included a number of guitars, accordion, trumpet, sax, trombone, and percussion. Throughout the year, each class presented a new song. The K-2 Sing-along group performed in the Holiday Program, by grade level and as an ensemble.

Here in My House

The singing of the song, “Here In My House”, by Aline Shrader, became a tradition at The Ray School December Choral concert for 21 years, 1982 -2003. It was not something I had planned-to sing the same song each year- it just happened. As all traditions, there is a story behind its beginnings.

The month of December with all its spiritual celebrations is a challenge for music teachers. When I arrived at the Ray School in 1978, Christmas, Hanukah and other traditional celebrations of the season had been totally omitted from the most recent winter choral programs. I did try to add some favorite musical pieces, but always, no matter what I did, it seemed it wasn’t enough; or it was too much!

I met with a local minister and rabbi for a discussion of the issue. I have never accepted exclusion and searched for an answer of how to celebrate the holiday season with the children and their families through music, all together. What developed was a program concentrating on community, respect, love, light and candles, which included songs of the holidays. Songs of the holidays addressed the excitement that all children had during the season. I tried to celebrate the season while simultaneously grasping the “air of anticipation” that surrounded the children. Through music I tried to include as much of the Ray School population as possible, so besides Christmas and Hanukah we included songs of Kwanzaa, Dwindali, and other December events. My hope was that the children could learn more about each other and their ethnic traditions through music.

In 1982, in a music catalogue I found a song that spoke to me of the season. One verse sang of Hanukah in one house, and a second verse sang of Christmas in another. A musical bridge spoke of the Season’s light, cheer and peace. The children performed it beautifully and I discovered the song spoke to many others because it was requested that I repeat it the following year (something I RARELY did was to repeat a piece). However, I was so excited to have found a piece that resonated in so many hearts, I did repeat it, and never stopped. Over the years it was presented in several different ways – concert performance, dance, mime, tableau – once, while the children sang, slides were projected on a screen behind the chorus, showing one after the other, many of the houses in and around Hanover where the children and staff lived. But the ultimate was the sing-along with the audience format.

In the summer of 1985, I had the pleasure of meeting the composer, Aline Shader, through a mutual friend. We began a correspondence and I performed additional compositions of hers; It was extremely meaningful for me to know the composer and to tell her how much her piece meant to me and to the Ray School Community. I would love to have been able to tell her that I concluded my final Holiday Program (2003) with “Here In My House”, but she died that very autumn. Through the years, it came to be the closure of our Holiday Concert with all students, parents and staff.

When children returned as young adults to visit me at the Ray School, I was always pleased to hear them say that when they got together with classmates, singing “Here In My House”, was something they all could do, and love to do, together, a fond memory of their elementary school days.

From the program of my last concert at the Ray School. 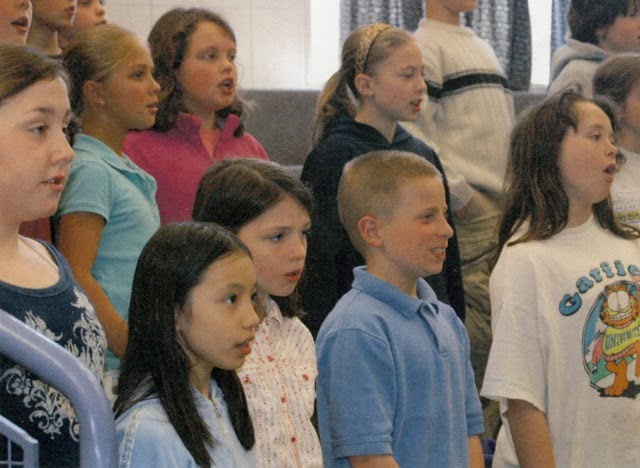 HERE IN MY HOUSE
Aline Shrader

All are invited to join in the singing of “Here In My House,” a tradition in its twenty-first year.

Verse 1:
Here in my house, there are candles burning bright, one for every night of the holiday.
We gather with friends, sharing gifts and happy times, Happy Hanukkah.

Verse 2:
And in my neighbor’s house the lights are shining, too, Red and green and blue, ’round the door.
The sound of jingle bells and laughter everywhere, Merry Christmas and many more.

Bridge:
Season of light, season of cheer, season of peace, may it last throughout the year.

Bridge repeated:
Season of light, season of cheer, season of peace, may it last throughout the year.

Two parts:
(Verses 1 and 2 together, sing the one you did not in the previous two parts)