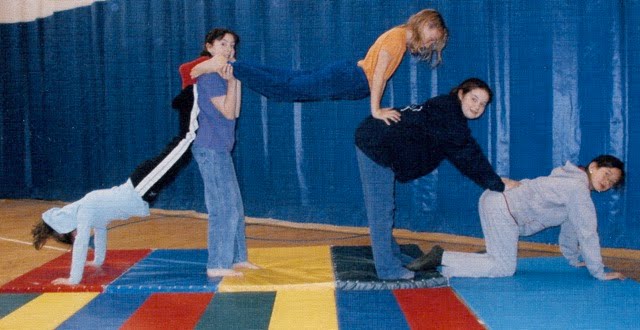 Tumbling was a favorite unit in Physical Education classes. And, the fifth grade tumbling show just tumbled out of it one year. The early shows were in the Multi and usually ran along a theme. One year, for example, they honored the space program. The students, both individually and in small groups, demonstrated their tumbling skills to the delight of the younger children in the school.

After the new gymnasium was built, the shows continued, but instead of a story line, what the boys and girls demonstrated was the ability of children to work together cooperatively in small groups made up of people whose skills were varied and at different levels of ability. This came about at the same time as the school turned to the 3R’s (Rights, Respect, Responsibility) for help at learning how to live together as a community